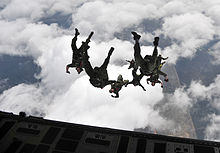 Members of the regiment during a freefall jump out of a U.S. Air Force C-17 Globemaster III during Emerald Warrior 2013, Hurlburt Field, Florida.

The unit traces its roots to the First Special Service Force (FSSF), the Canadian-American special forces unit that was stood up in 1942 and earned the “Devil's Brigade” moniker for daring night raids on German forces at the Anzio beachhead.[2]

In April 2005, the Canadian government's new defence policy statement was made public. It included a concept of first responders for international tasks consisting of "special forces" (such as an expanded Joint Task Force 2) supported by one of the light battalions.

This concept of operations is similar to the US Army's 75th Ranger Regiment and the Special Forces Support Group of the UK Special Forces Group who support high-level special forces units. This eventually led to the formation of the Canadian Special Operations Regiment (CSOR), although CSOR was not to be limited to a supporting role.[3]

In the main, the Canadian Special Operations Regiment enables special operations and, specifically, JTF2; thus, JTF2 can focus on the precise tasks for which they are so well selected and trained. However, particularly in out-of-area operations, we see that the Canadian Special Operations Regiment would be the more appropriate organization to put to the task.

Recruiting for the new unit took place in early 2006, and the first CSOR selection course took place with approximately 175 candidates.[5]

On 13 August 2006, an official stand-up ceremony for the Canadian Special Operations Regiment took place at the unit's home station, Canadian Forces Base (CFB) Petawawa, with approximately 250 soldiers participating. The ceremony included a skills demonstration including rappelling from helicopters, and both static and freefall parachuting. It was also announced that the second training serial of CSOR recruits would take place in early 2007.[6]

The regiment suffered its first casualty on 24 June 2011: Master-Corporal Francis Roy died in a non-combat incident while deployed in Kandahar Province, Afghanistan.[7][8]

In March 2015, Sgt. Andrew Joseph Doiron became the unit's first casualty directly related to the war on terror when he was killed by friendly fire from Kurdish Forces. [10]

The regiment also works with international partners, and helped in the training of the Jamaican Defence Force counter-terrorism assault team [12] and Belize's special forces, the Belize Special Assignment Group [13]

Members of the regiment are currently serving as part of Canada's commitment to anti-ISIL operation (see: Operation Impact), serving in advisory roles, forward air-controllers and in counter-sniper/mortar roles. 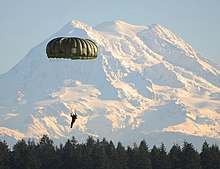 While the regiment is composed of personnel from the Canadian Army, Royal Canadian Navy and Royal Canadian Air Force, it is part of the Canadian Special Operations Forces Command, a joint command responsible for providing agile, high-readiness special operations forcescapable of operating across the spectrum of conflict at home and abroad. The command is composed of CSOR and 427 Special Operations Aviation Squadron (427 SOAS) in Petawawa, Joint Task Force 2 (JTF-2) near Ottawa, and the Canadian Joint Incident Response Unit(CJIRU) in Trenton. Colonel Jamie Hammond was the first commanding officer of the Canadian Special Operations Regiment, followed byLieutenant-Colonel Greg Smith, followed by Lieutenant-Colonel John Vass. The current commanding officer is Lieutenant Colonel Steven Hunter.